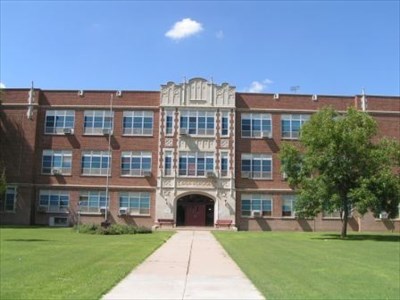 In 1925, a bond issue in the amount of $128,000 was approved for the construction of a new high school building. At that time, due to increased enrollment, high school classes were being held in the college building, which the district had purchased in 1916. Five and one-half acres of land was purchased on Park Avenue and Avenue F.

Music and athletics have always been a big part of the school system. The 1925-26 school year may be considered the beginning of the full district sports program. The red brick building (Stanton Building) was occupied in 1926 and served as the high school until the present high school was completed in 1954. The junior high students moved from the barracks into the Stanton Building (old high school) in 1956 and it became the new junior high.

Until the present cafeteria was built in 1959, the students used the old junior high barracks as a cafeteria.